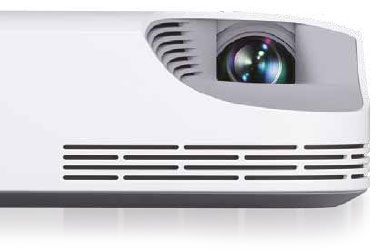 Leicester College prides itself on delivering the ‘thrill of further education’ to its learners and has always strived to provide a quality classroom experience.

This is why in summer 2016 they embarked on a project to improve their classroom display solutions.

The College previously used lamp-based projection in their facilities but were becoming increasingly frustrated with the maintenance needs and costs, recognising that their current projectors weren’t performing to the high standards of the College.

Phil Marshall, joint managing director of KPMS, a nationally-recognised AV integrator in the educational market explained, “The College approached us for guidance and we were able to quickly see that even if the lamps were replaced, the image quality was not going to return to the levels they expected and the maintenance costs were only going to increase over time.”

So Phil brought in a Casio Core V10X for a demo to show the College what high-quality and cost-effective projection could look like and Leicester College quickly realised that a re-fit was in order. After taking the project out to tender, Leicester College awarded KPMS the contract due to their expertise and experience with Casio projectors.

“Casio projectors are truly up to the job when it comes to creating worry-freeand high quality visuals”
Phil Marshall, joint managing director of KPMS

Phil and his team were enlisted to install 184 Casio Core V10X projectors across three different college campuses; St. Margaret’s, Abbey Park and Freemans. In addition to installing the projectors into a majority of the classrooms in Leicester College, the KPMS teams of engineers also needed to remove and replace the existing projectors over an ambitious 30 day timeframe, which also overlapped with the end of term-time. “The College was fantastic throughout this process,” said Phil, “freeing up rooms through the end of terms for our teams to quickly remove the old faulty models and replace them with the Core.” Removing the old stock was half the battle as adequate storage and safe transfer was required.

Lamp-based projectors rely on harmful mercury within the lamps and this must be treated with care and attention during the removal process. Thankfully through Casio’s great relationship with KPMS, the stock of the new projectors were able to be trickle-fed into the college throughout the installation, allowing for adequate time to safely remove the old projectors.

All of Casio’s Laser & LED hybrid projectors are lampfree, thus eliminating mercury and replacement parts for improved sustainability. Casio’s SSI light source reduces power consumption up to 50% over its lifetime too, boosting the college’s green credentials. “With Casio, we were able to provide a real fit-it-andforget-it solution,” Phil continued. “They have the peace of mind that the projectors will always work as they need to, without the performance drop-off issues they had previously struggled with.” Leicester College was particularly impressed by Casio’s instant on/off capabilities. Without lamps, the projectors don’t have to undergo any cooling cycle, meaning that teacher can jump between using a projector and other teaching methods throughout the lesson. 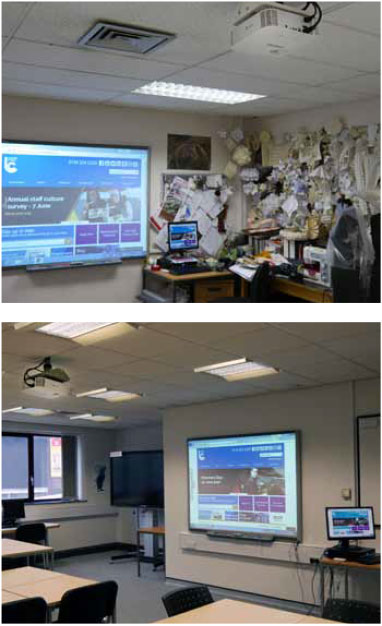 There are also no worries that the illumination will fail mid-lesson. Whereas previously, teachers only had to trip over the wrong wire or flip the wrong switch and a lamp would fail, affecting not just their lesson, but any other lessons that follow in that classroom. The Casio lampfree Core models have no risk this. They have no filters or other replacement parts either, rendering them virtually maintenance free and avoiding down-time. Additionally, Casio projectors have intuitive connectivity options, making them simple to incorporate into existing infrastructure. This was of great benefit to KPMS, as the Leicester College install was primarily a replacement job.

The Core V10X provides a 1.5x optical zoom and up to 3,300 ANSI lumens brightness. This made it ideal for fitting into the mounting systems that Leicester College already had. The zoom options meant that getting the display placement correct was incredibly simple, and the high brightness allowed for clear viewing even in high ambient light classrooms without the need to draw curtains.

This was a significant installation for both KPMS and Leicester College, and the installation was completed without any issues in just three weeks and two days. Installing the lamp-free Casio Core V10X was the perfect solution for Leicester College, Phil concluded. “Casio projectors are truly up to the job when it comes to creating worry-free and high quality visuals.

The fact that they are so budget friendly to schools is really important; it means that any school has access to the best quality visuals, and their fantastic 5 Year or 10,000 Hour warranty meansthat the schools we install Casio projectors in achieve total peace of mind.”