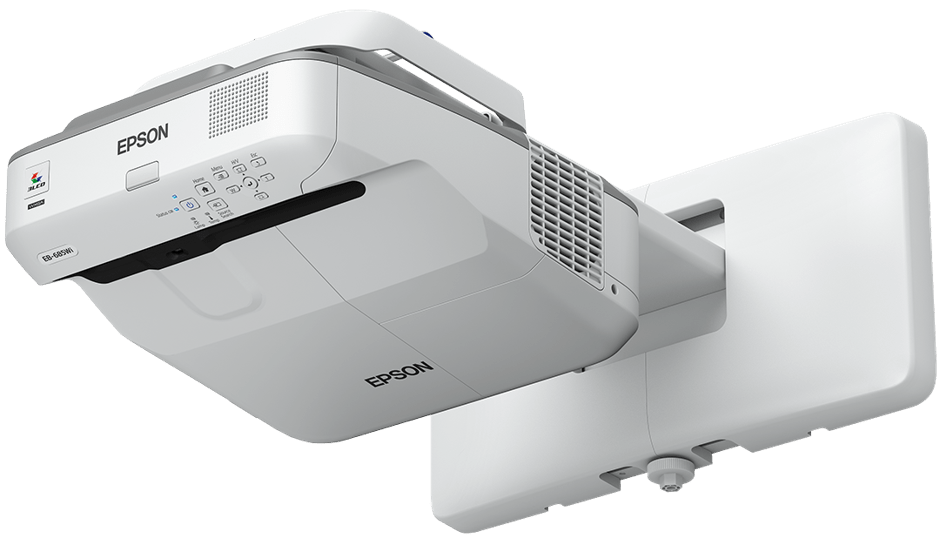 Epson is one of the biggest names in the projector space with a series of projectors that cater for most budgets and technical requirements. Compared to other brands, they tend to run on the affordable side with a good range of features.

The Epson EB-680 Ultra Short Throw Projector is one such affordable option. Priced at a reasonable £899.00 excluding VAT, it’s one of the most affordable lamp projectors from a big name brand. But is it any good?

The first thing you need to know about the Epson EB-680 is it covers every base decently enough. This isn’t the kind of projector that will blow people away – but it is the kind you can rely on to display a good image time after time.

The native resolution is 1,074 x 768 XGA which by today’s standards is the bare minimum for a projector. It means you can play 720p videos on it (one up from DVD quality 480p, but not as crisp as 1080p which is the quality of Blu-Ray).

So, you know what you’re going to get resolution wise: crisp images that aren’t quite as crisp as the most expensive projectors. But really, this is a small negative because otherwise the image is fantastic. There’s a 3,500 lumen brightness, so you can play large images from a very short distance in bright rooms, such as those with natural light.

It also has Epson’s 3LCD technology, a special light output configuration that makes viewing easier on the eyes with truer-to-life images.

In addition to displaying the one image, the EB-680 also allows you to throw a split-screen up, allowing two pieces of content to be viewed at the same time while keeping the quality with no drop in resolution. These can be from two different sources. Wireless connectivity is available optionally for use with the Epson iProjection app.

The Epson EB-680 Ultra Short Throw Projector can throw an image from 55-inches up to 93-inches in size with XGA resolution. The image is extremely bright and viewable, even in a bright room with the lamp brightness turned down.

It operates near silently and doesn’t get too warm with extended use, although the lamp does get hot. Despite this, the lamp is rated for 10,000 hours in eco mode, which you should use to extend the life of the projector.

Although it’s an optional extra, the wireless connectivity makes sense because it allows you to display content from a variety of devices without plugging in a USB cable. It would have been nice for it to be included, but at this price, it isn’t expected.

If you are looking for an affordable ultra-short throw projector with a good image from a well-known brand, the Epson EB-680 is a great choice. It offers good value for money and is a perfect fit feature-wise for classrooms and boardrooms. At this price point, you can do far worse and not much better. We highly recommend it.